When a sound is emitted in the room, it will first reach to a listener directly (it is called a direct sound). While the sound wave is traveling, its pressure level decreases according to the inverse square law. Much sound reaches to the listener, after reflecting on the walls. In the meantime, the sound is attenuated on a certain frequency more than other frequency for change like diffusion, absorption, reflection, and refraction. Hearing such a sound differs greatly from hearing sound at once. (by Don Davis, Sound system engineering.)

This time, I report the acoustics measurement performed in an auditorium in Kobe, Japan.

This is the impulse response for 4 kHz band. The IACC of 0.28 is a very good value for the spaciousness. If the IACC increases, good spaciousness or the sense of envelopment could not be attained. In the listening room, the IACC value was almost 1. 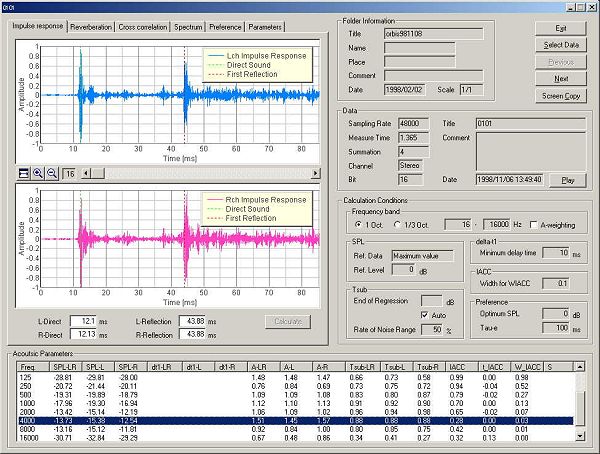 This is the impulse response for 16 kHz. In this case, it is measured with a good S/N ratio, because the quality of the loudspeaker is good. As shown in Audio measurement 2, KENWOOD OMNI 5 has the sufficient quality between 500 and 4000 Hz. 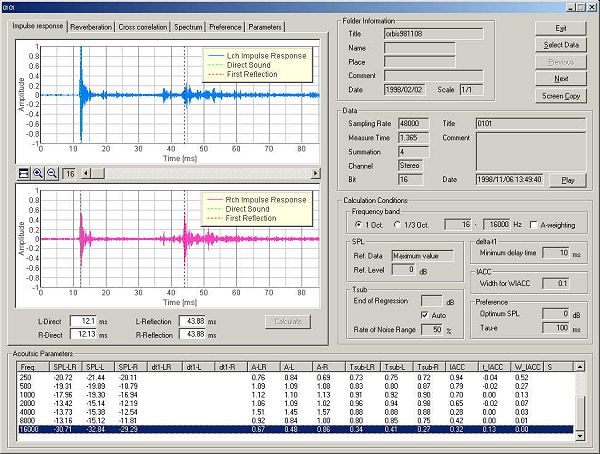 This is the omni directional loudspeaker used for the measurement. 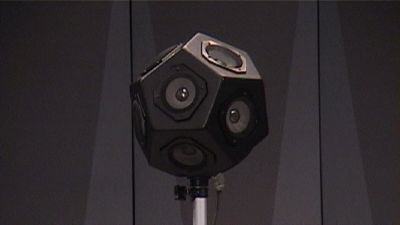 The acoustical characteristics of the room are analyzed by the sound analyzer (SA). The optimal value (target value) of the sound parameter is explained first. Take it just as reference since this is the case of a large room like a concert hall.

The optimal sound pressure level is 77-79dBA for slow tempo music and is 79-80dBA for the quick tempo music. The most important conclusion is that the optimal level does not shift from 79dBA greatly even if a music motif and tempo is different. (Yoichi Ando, Concert hall acoustics)

As shown in the table, the optimal reverberation time is about 23 times of Tau_e. The above is a summary from Ando's Concert hall acoustics.

The reverberation time is the time required to decrease 60dB, after the sound of a stationary state stops.

The calculation conditions for the impulse response

The parameters were calculated by SA.

A green line in the left side of the graph shows the time delay of the initial reflection (14 ms). Red and pink curves show the Schroeder integration with and without noise correction. In the noise correction setting, signal in the latter 50 % time range is not used for the calculation. This noise-corrected curve is used for the calculation of the reverberation time. The straight regression line is calculated between 0 dB and 10 dB (see the setting window above) points. The reverberation time is the point at which the straight line decreases to 60 dB. In this graph, this point is found at 295 ms.

Calculated values for each octave band are shown in the table below the graphs. This is the reverberation analysis for the 500 Hz band.

May 2003 by Masatsugu Sakurai